Kayaking has become more and more popular over the last few decades, and many new people have become interested in the sport. But because few of these newcomers are interested in spending thousands of dollars on their first kayak, many manufacturers have begun offering very capable crafts at entry-level prices.

Some, such as the Sun Dolphin Excursion 10, are even designed specifically for the needs of anglers. While the Excursion 10 won’t be confused with a high-end vessel, and it lacks the performance characteristics and stability that many advanced kayakers demand, it is very well-suited for beginning kayakers, looking for their first vessel.

Featuring a sit-inside design, the Excursion 10 is a reasonably robust craft, which is built to handle the wear-and-tear repeated fishing trips inflict on a craft. And, because it is made from UV-stabilized high-density propylene, the Excursion 10 remains rugged and durable, while still being lightweight.

However, although Excursion 10 is made in the USA, like most other Sun Dolphin vessels, some anglers reported sharp edges and minor aesthetic flaws, which are common to many entry-level kayaks.

Beginning kayakers aren’t always beginning anglers, so it is important to select a craft with adequate storage space. The Excursion 10 attempts to do so, but it doesn’t provide quite as much storage space as the average angler may want.

It features a single storage compartment, with a bungee-secured lid to keep your gear secure. Three rod holders – one swiveling and two flush-mount – are provided, as is a water bottle holder (located on the bow) and a paddle keeper.

The Excursion 10’s cockpit is reasonably roomy for the craft’s size. The foot braces can be adjusted to accommodate riders of different sizes, but very large or very tall riders may not find that the cockpit fails to provide enough leg room.

Thigh pads are included to protect your legs, and the padded seat is adjustable to provide maximum comfort. A few anglers complained that the seat, while padded, was not padded enough to provide the kind of comfort they wanted.

The Excursion 10 provides a relatively impressive 30-inch beam, which is probably a bit wider than most other hard-sided kayaks at this price point.

Accordingly, most anglers who tried this vessel – including those who were new to kayaking – found that it was surprisingly stable. It is probably not stable enough to permit standing, but relatively few kayaks in this price range do. 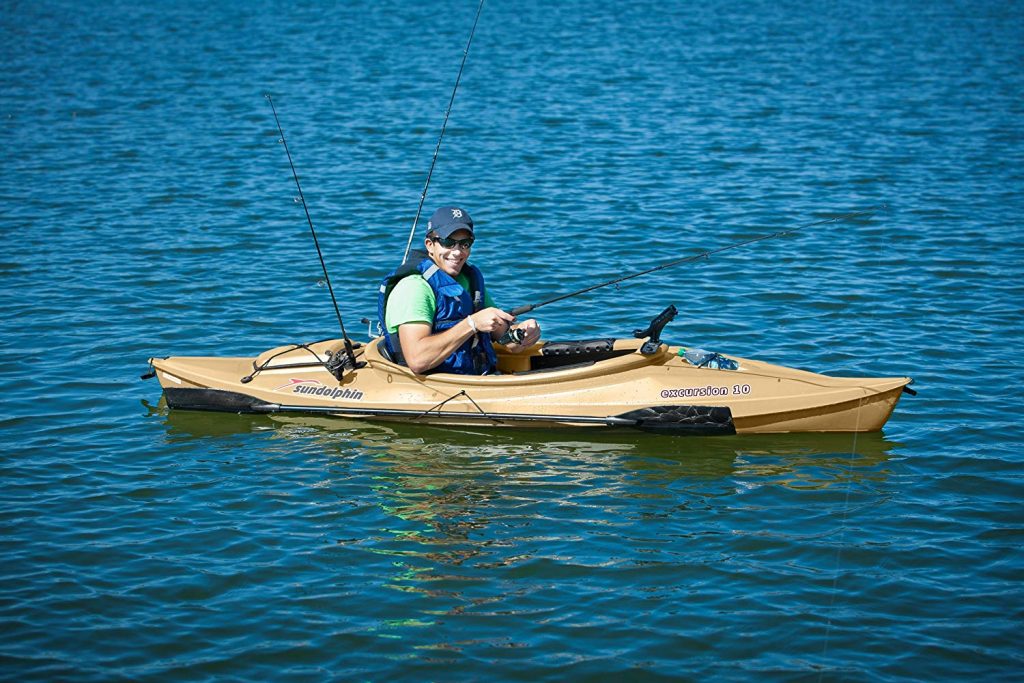 The Excursion 10 is maneuverable enough that beginning kayakers shouldn’t rule it out, but advanced paddlers will probably want a craft that performs a little better in the water.

It is small and turns on a dime, but it doesn’t track well when crossing long distances. It is, however, easy to move around on dry ground, as it weighs only 41 pounds. It also features carrying handles at the bow and stern.

Anglers looking for their first kayak will likely find the Excursion 10 provides almost everything they need. It is a durable, lightweight and generally well-made vessel, which is easy to paddle and carry to and from the water. It will keep you upright while learning the finer points of paddling, and it is stable enough to allow you to cast and retrieve with confidence.

You probably won’t find it stable enough to stand up while fishing, but this is a common shortcoming of entry-level kayaks. It may limit the amount of tackle and gear you can bring aboard, but with a bit of organization and creativity recreational anglers should still be able to bring enough gear for a couple of hours of fishing.