Even budget-priced kayaks usually cost several hundred dollars, which effectively prices out many would-be kayakers. However, there are a few inflatable kayaks, which can allow you to get on the water and catch a few fish without spending much money at all – like, for example, the Sevylor Tahiti 2-Person Kayak. Designed to be easy to store, transport and use, the Tahiti 2-Person Kayak will give even the most cash-strapped anglers purchase a kayak of their own.

In fact, you’ll probably spend less on this vessel than you have spent on the hooks, weights and lures in your tackle box. You won’t want to use this kayak for fishing deep offshore waters or battling gigantic fish, but if you just want to try fishing in a kayak or acquire a kayak that’s easy to take to the lake on a whim, it may be just what you’re looking for.

The Tahiti 2-Person Kayak is made from 21-gauge PVC, which makes it surprisingly durable. You definitely don’t want to stick a hook in it, but it will hold up for calm waters if you are careful while launching and landing the craft or piloting shallow waters. It does feature Sevylor’s Airtight System and is guaranteed not to leak.

It also features multiple air chambers, which should keep you afloat long enough to return to shore if you do puncture it. The Tahiti 2-Person Kayak also includes Double Lock Valves provide two places from which the boat can be inflated or deflated.

Few inflatable kayaks provide very much storage space, but The Tahiti 2-Person Kayak doesn’t provide any at all. You may be able to tuck a backpack under the spray shield in the bow or stern, but there aren’t any pockets, compartments, or rails included.

There aren’t even any rod-holders provided, which means you’ll have to be very careful with your rod and you probably won’t want to bring along more than one. The boat itself is quite easy to store and it comes with its own carrying bag.

The Tahiti 2-Person Kayak is about as comfortable as you’d expect one of the cheapest kayaks on the market to be. The air-filled seats don’t provide very much support at all, and many kayakers reported that they removed the seats entirely.

There isn’t very much legroom either, particularly for the angler riding in the back. Bow and stern spray guards are included to help keep you dry during your journeys.

One area in which the Tahiti 2-Person Kayak excels is stability; but to be fair, most inflatable kayaks provide a relatively stable ride. You won’t find standing easy (if possible at all) because the floor does not provide a firm surface, but you won’t have to worry about tipping over if you use the craft on calm waters.

It has an NMMA-certified capacity rating of 360 pounds, but this is a pretty modest capacity for a tandem kayak – you’ll want to carefully consider the size of the riders and leave most of your gear at home. 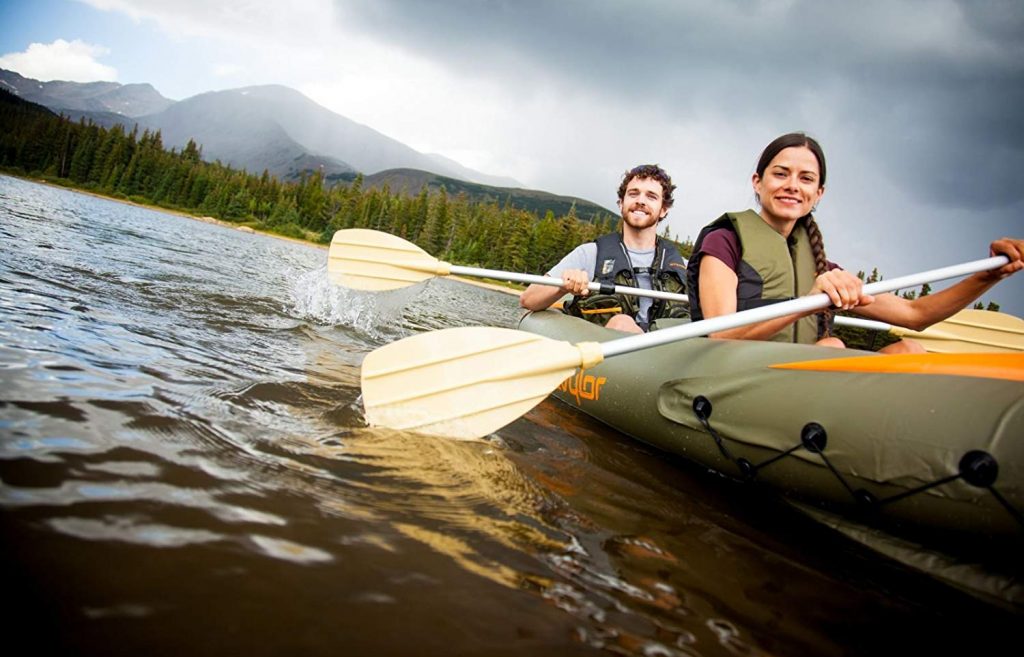 As is, the Tahiti 2-Person Kayak is only moderately maneuverable. It is easy to paddle around the water, but it will get blown off course significantly in even modest winds. Even during calm conditions, the vessel fails to track especially well, so you’ll have to concentrate on your paddling technique to keep a straight heading.

It can be deflated for transportation and storage, comes with two carrying handles and only weighs about 20 pounds, so it is very easy to carry across dry ground. Additionally, it will work with Sevylor’s optional skeg, which will improve the kayak’s tracking ability. 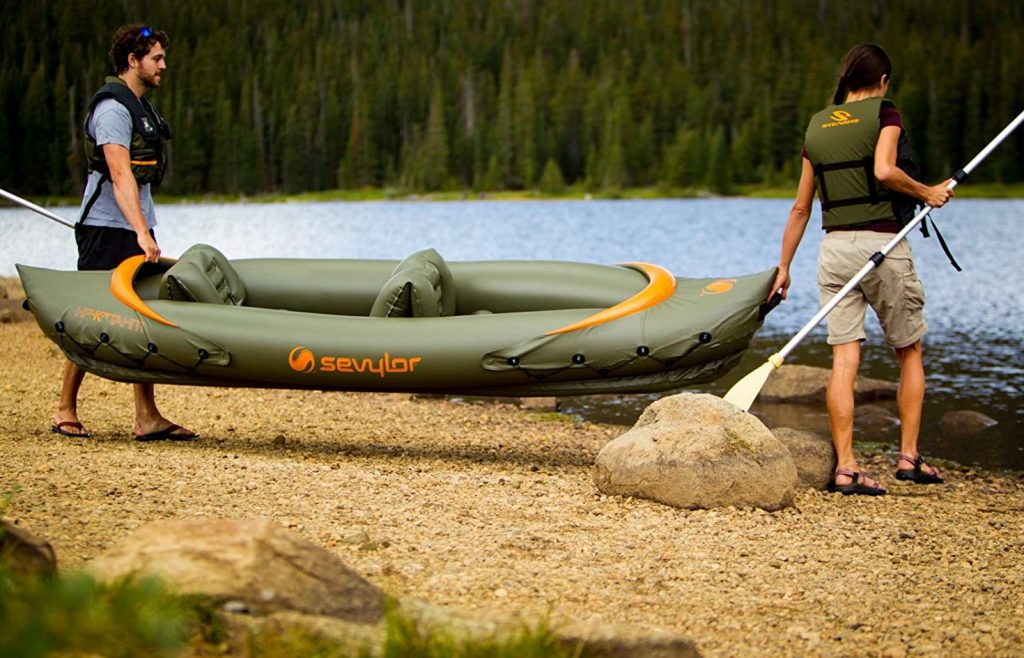 The Sevylor Tahiti 2-Person Kayak is not designed for serious anglers who want to carve up the water and catch big fish. It is designed for families, kids or casual anglers, who just want an affordable way to get out on the water. Nevertheless, it is reasonably effective in such circumstances and a viable option for some.

You’ll have to figure out someway to haul the tackle and equipment you want with you, as there’s no storage space provided, and you’ll also have to contend with a rather uncomfortable ride. However, if you aren’t discouraged by these issues, you may want to consider acquiring a Tahiti 2-Person Kayak of your own.