Inflatable kayaks usually evoke images of cheap toys lining the aisles of big-box retailers. However, there are a few high-quality inflatable kayaks on the market, which typically bear price tags in line with hard-shelled kayaks designed for beginners and intermediate paddlers.

The Sevylor Colorado 2-Person is a good example of these types of crafts, and it deserves serious consideration from anglers looking for a capable and high-quality vessel at a reasonable price point. It overcomes several of the problems that plague other inflatable kayaks, while still remaining lightweight and easy to transport.

Made from 18-gauge PVC and featuring a 1000D tarpaulin bottom and 840D nylon cover, the Colorado 2-Person Kayak is surprisingly durable for an inflatable kayak. It should be tough enough to last for years if used with care, and it offers pretty good protection against hooks and other sharp items frequently carried by anglers. It isn’t a good choice for river use, but it should work well at your local pond or lake.

Inflatable kayaks rarely provide tons of storage space, but the Colorado 2-Person Kayak actually provides more than most. Six mesh pockets are located in the various places throughout the cockpit and provide places to store tackle and small tools, and both seats feature rear storage pockets. A few D-rings are also included to give you an easy way to attach other items.

Unlike many other inflatable kayaks, which provide inflatable seats that provide relatively little support, the Colorado 2-Person Kayak comes with padded, adjustable seats that make for a pretty comfortable ride. The cockpit is a bit tight, and it does not provide a large amount of leg room, but most anglers felt that it was roomy enough for average-sized riders.

While a few anglers reported that they were able to remain dry while riding in the Colorado 2-Person Kayak, most riders seemed to get wet during use.

The Colorado 2-Person Kayak is a very stable craft, despite being only about 24 inches wide. You won’t be able to stand up in it while fishing, but this is due to the lack of a standing platform, not the stability of the vessel. The kayak is NMMA certified to hold 470 pounds, so you will probably be able to bring as much gear as you like without worrying about buoyancy problems. 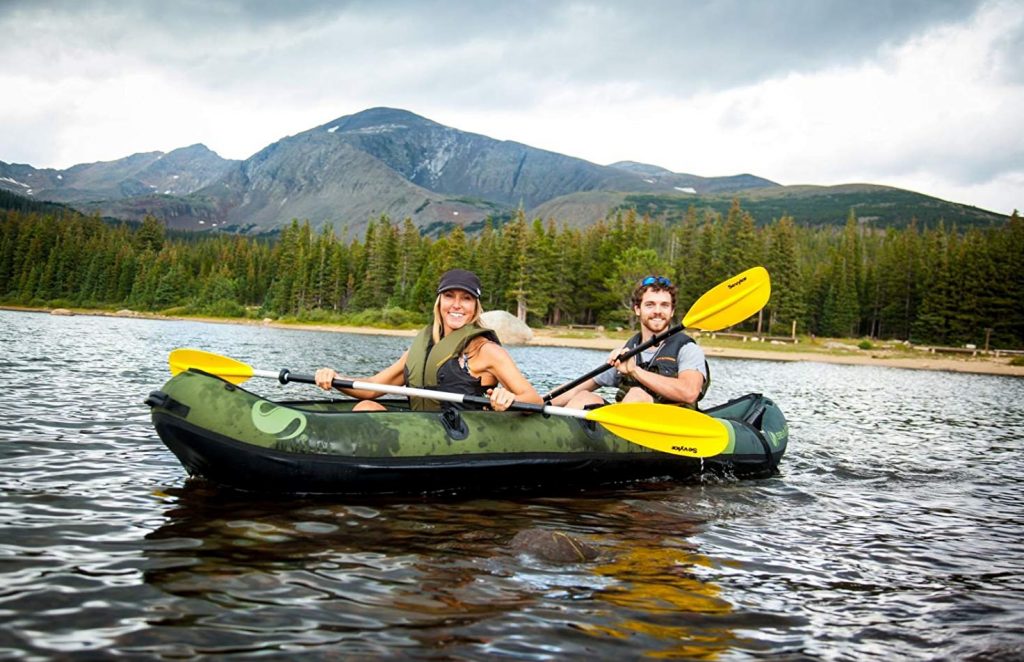 Despite being an inflatable kayak, the Colorado 2-Person Kayak appears to track reasonably well. It will work with Sevylor’s optional skeg, which can improve the craft’s tracking ability even more, but most anglers found this unnecessary. Several anglers did complain that the rod holders impeded their ability to paddle, which is somewhat disappointing.

Like most inflatable kayaks, the Colorado 2-Person is very easy to carry over dry ground. It comes with bow and stern carrying handles, and it only weighs about 40 pounds. And of course, you can easily deflate it for transport or storage.

Inflatable kayaks don’t appeal to all anglers, and they do exhibit some limitations. However, anglers who value portability and stability above most other factors should give the Sevylor Colorado 2-Person Kayak serious consideration. It is durable enough to last for several seasons, and it handles reasonably well on the water. It provides more storage capacity than most other inflatable kayaks do, and it boasts a pretty impressive weight capacity.

You’ll want to limit your travels to relatively calm and near-shore waters when using this craft, but thanks to its reliance on multiple air bladders, you’ll probably be able to remain afloat long enough to get back to shore, should the vessel suffer a puncture.