Most kayak manufacturers produce an entry-level model to give kayaking novices to get their feet wet (so to speak) and try out the sport without breaking the bank. But unfortunately, while many of these models are priced very affordably, they often accomplish this at the expense of features and performance.

Like all Perception Kayaks, the Striker 11.5 is hand-built and assembled in the USA, which ensures that it features the kind of quality modern kayakers and anglers demand. Built from high-density polyethylene and formed using one-piece roto-molded construction techniques, the Striker 115 is UV-, abrasion- and impact-resistant, so that it will hold up to years of use.

The kayak measures 11.5 feet long and 33 inches wide, giving it plenty of buoyancy (it has a rated capacity of 500 pounds) and stability. Additionally, the Striker 115 comes with a 5-year warranty, which allows you to purchase with confidence.

The Striker 11.5 provides several different places for anglers to store their gear. Two cargo areas are provided, with one in the bow and one in the stern. Both are equipped with elastic bands for keeping your cooler, bait well, backpack and other gear secure.

Two water-tight hatches are provided for storing tackle and other small items, and four molded-in rod holders are included to allow you to store your rods while paddling or give you the chance to troll across large expanses of water.

One of the other ways Perception Kayaks has managed to keep the Striker 11.5’s price low is by foregoing a separate seat back, and instead designing the craft with a molded-in seat (note that the kayak is designed to accommodate an after-market seat, if you so choose). While the molded-in seat is not adjustable, it does provide two different seating options.

You can sit down low to the water while paddling, for maximum stability, or you can sit on the elevated seat platform, to provide you with a better vantage point for fishing. In general, the cockpit is quite roomy, and the numerous foot wells provide anglers with seven different foot-placement options.

The Striker 11.5 is designed with stability in mind. In fact, this is one of the things most anglers who tried the craft praised the most. It is a very buoyant and stable kayak, with a tri-hull design that gave many anglers the necessary confidence to stand up while fishing.

It isn’t a great option for rough, off-shore waters or wave-blasted surf regions, but it provides more than enough stability for ponds, rivers and gentle coastal waters. 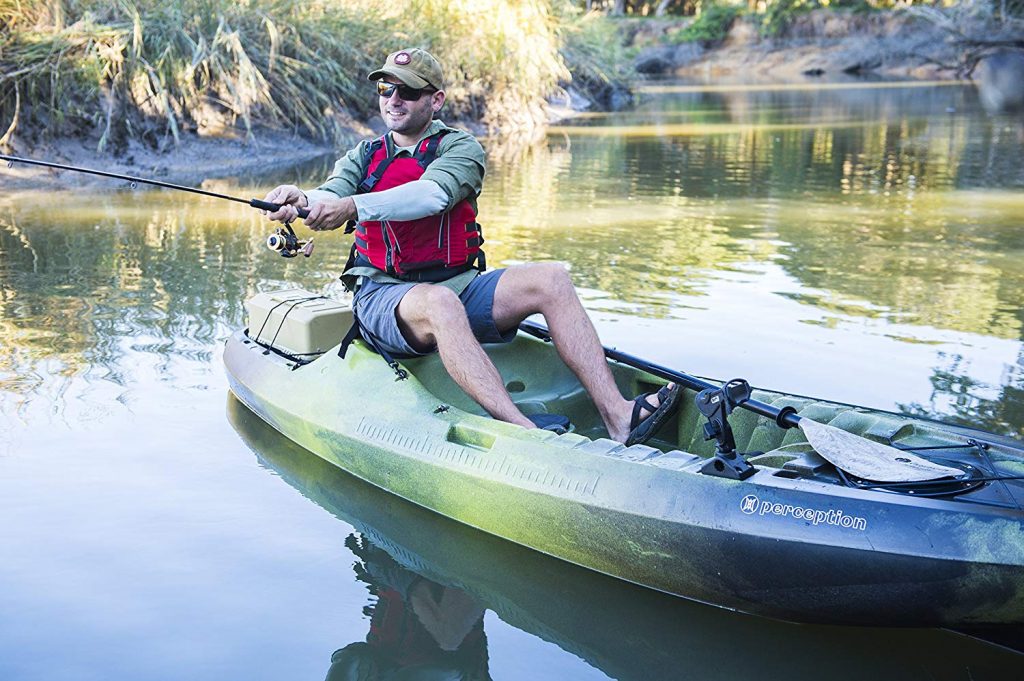 The Striker 115 tracks reasonably well, but you may find yourself drifting a little off course during long stretches across open waters. However, given the combination of the kayak’s low price point, ample storage space and superior stability, this is a reasonable tradeoff to make.

It turns reasonably well, and it is easy to get to and from the water, thanks to the included handles. It does weigh 65 pounds, which is a bit heavy for an 11.5-foot-long kayak, but this isn’t a terribly significant problem.

The Striker 11.5 isn’t the best-equipped or highest-performance kayak on the market, but it isn’t intended to be. Instead, it is designed to provide beginning and cost-conscious anglers with a capable and comfortable craft, that will allow you to learn the finer points of paddling and craft control, while still catching plenty of fish in the process.

It provides a wealth of storage space, and all the stability you could reasonably expect in an entry-level kayak. It is a bit heavy, but most anglers will still find that it is relatively easy to haul to and from the water, and the craft’s impressive buoyancy allow even large anglers to bring along all the equipment desired. Bottom line: The Striker 11.5 is a great option for novice kayakers who want to take their angling to new levels.