Time is a precious commodity for many anglers, and it is always preferable to cut down the amount of time you spend traveling between fishing spots. But unfortunately, many angling kayak manufacturers emphasize things like stability and storage space, rather than speed. This often forces kayaking anglers to remain in unproductive locations, rather than investing the time needed to reach another spot.

However, a few kayaks – including the Hobie Mirage Revolution 16 – have been designed with speed in mind and will help you make better use of the time you have on the water. But the Mirage Revolution 16 is more than just a fast kayak, and it excels in a number of other areas too, including storage space and comfort, among other things.

Measuring 16 feet long and 27 inches wide, the Mirage Revolution 16 is a sleek and lithe craft, which is designed to cut through the water like a knife. But because it is made from rotomolded polyethylene, it is much more durable than many other speedy kayaks.

The hull lacks a skid plate, but it is durable enough to withstand the rigors of repeated launches and landings. The Mirage Revolution 16 is available in five colors: Seagrass Green, Slate Blue, Red Hibiscus, Papaya Orange and Ivory Dune.

The Mirage Revolution 16 provides more storage space than you may expect from such a slim vessel. Two 8-inch twist-seal hatches are included – one is placed in the cockpit, the other is situated at the stern. A third (and larger) storage compartment is located ahead of the cockpit and provides a place to store larger tools and equipment.

The Mirage Revolution 16’s cockpit isn’t the widest one on the water, so larger anglers may not find it very comfortable. However, svelte paddlers will likely find it provides more than enough room.

The cockpit does provide plenty of leg room, and two foot wells are included to give you a stable base when paddling. The included Vantage CT Seat is adjustable in four different ways to allow you to achieve a comfortable paddling or pedaling position. 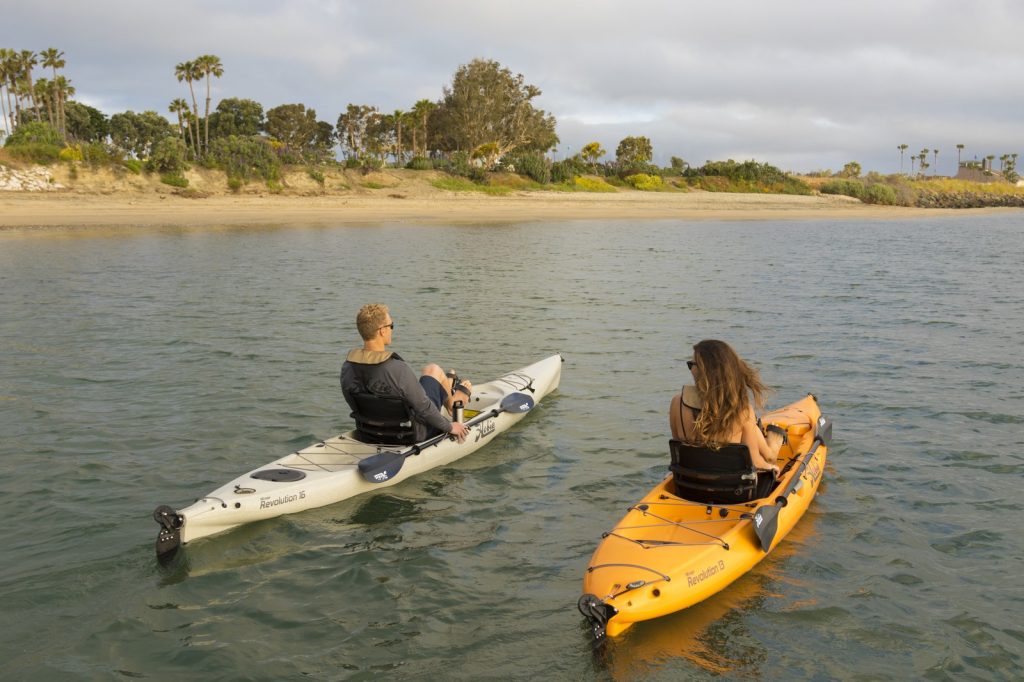 Standing is all but impossible in the craft, as is sitting sideways. Advanced paddlers will likely find that it is adequately stable, given its excellence in other areas, but novices may find that it lacks the stability they want.

It is hard to consider any 16-foot-long craft nimble, but the Mirage Revolution 16 does turn fairly well for such a long vessel. The included twist-and-stow rudder allows you to spin in a relatively tight circle or make gentle course corrections during lengthy stretches. As mentioned earlier, the Mirage Revolution 16 is quite fast, thanks to the hull’s shape and dimensions, as well as the included MirageDrive 180 pedal system.

In fact, you can make the Revolution 16 even faster by adding on the optional Hobie Kayak Sail, if you want to cruise around about as fast as possible without using a motor. The Mirage Revolution 16 does weigh 92 pounds when fully rigged, so it isn’t easy for a single angler to carry, but it does come with handles located at the bow, stern and cockpit area, to help make it easy for two people to carry.

Advanced paddlers who want one of the fastest angling kayaks around will likely find the Mirage Revolution 16 is a fantastic vessel. It flies across the surface, includes the MirageDrive 180 pedal drive system and can be used in conjunction with an optional sail to reach even greater speeds.

It has a ton of storage space and provides a fairly comfortable ride for most average-sized anglers. It isn’t a terribly stable craft, but it will likely prove stable enough for experienced kayakers. Anglers seeing a speedy, high-performance vessel are likely to be quite pleased with the Mirage Revolution 16.