Tandem kayaks are great for families and anglers who typically fish with a friend. But it is important to select a tandem model that will perform as well as single-rider kayaks will. This isn’t always easy, as many manufacturers tend to cram a second seat in with little regard for how it affects the performance.

The Hobie Mirage Outfitter is a great option for anglers seeking a high-performance kayak that will provide a comfortable ride for two anglers at a time. Additionally, unlike many other tandem-style kayaks, which require the riders to paddle, the Mirage Outfitter is equipped with the Mirage Pedal Drive 180. This allows riders to pedal around lakes, rivers and oceans with ease.

It does not, however, feature a skid plate, so you’ll need to use care when launching, landing or traveling through shallow water with the vessel. 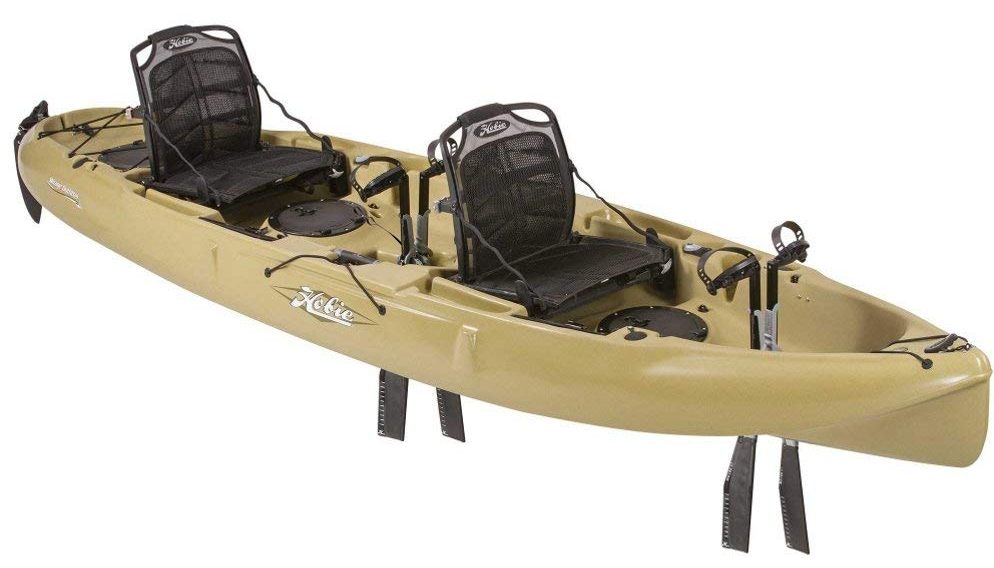 The Mirage Outfitter offers a number of different places for storing equipment and supplies. Three 8-inch twist-and-seal hatches are provided to give you places to store small tools and tackle. A hatch is located in front of both seats, and the third is located in the stern.

A large cargo deck is also located at the stern, for storing coolers, live wells and other bulky items. Bungee straps are provided to ensure your gear stays secure. Two mesh pockets are provided near each of the seats, and four flush-mount rod holders are also included; two are located near the bow, and two are positioned near the stern.

The Hobie Mirage Outfitter has a spacious cockpit, which provides plenty of leg and elbow room for riders. Hobbie’s Vantage CT Seats feature mesh backs to keep your back cool and dry, and they can be adjusted in four different ways to ensure all riders can achieve a comfortable ride.

They can even be removed so that you can use them on the beach or shore. Unfortunately, the seats cannot be moved back or forward, but most anglers will still find the pedals easy to operate while sitting in the seat.

The Mirage Outfitter provides a remarkably stable ride, thanks in part to its 34-inch beam. Several anglers who tried the vessel reported that it handled relatively large swells with ease and that you could sit sideways or stand up without fear of tipping.

The Mirage Outfitter boasts a 425-pound capacity, so you can bring along plenty of gear and equipment, and most anglers who tried it reported that it floated high on the water and provided a dry ride.

Measuring only 12-feet-and-8-inches long, the Mirage Outfitter isn’t especially big for a tandem kayak. This helps to make it relatively maneuverable and suitable for use in crowded waters or cluttered areas near the shore. Of course, like many other Hobie vessels, the Mirage Outfitter comes with the Mirage Drive 180 pedal system, which not only ensures that the craft is relatively fast, but also that you won’t have to put down your rod when moving from place to place.

The Mirage Outfitter also includes two different rudder controls, so that the front or rear rider can steer the vessel. Fully rigged, the Mirage Outfitter weighs about 125 pounds, so you’ll need a friend to help you carry it, but it does come equipped with four carrying handles to make it easy to haul. 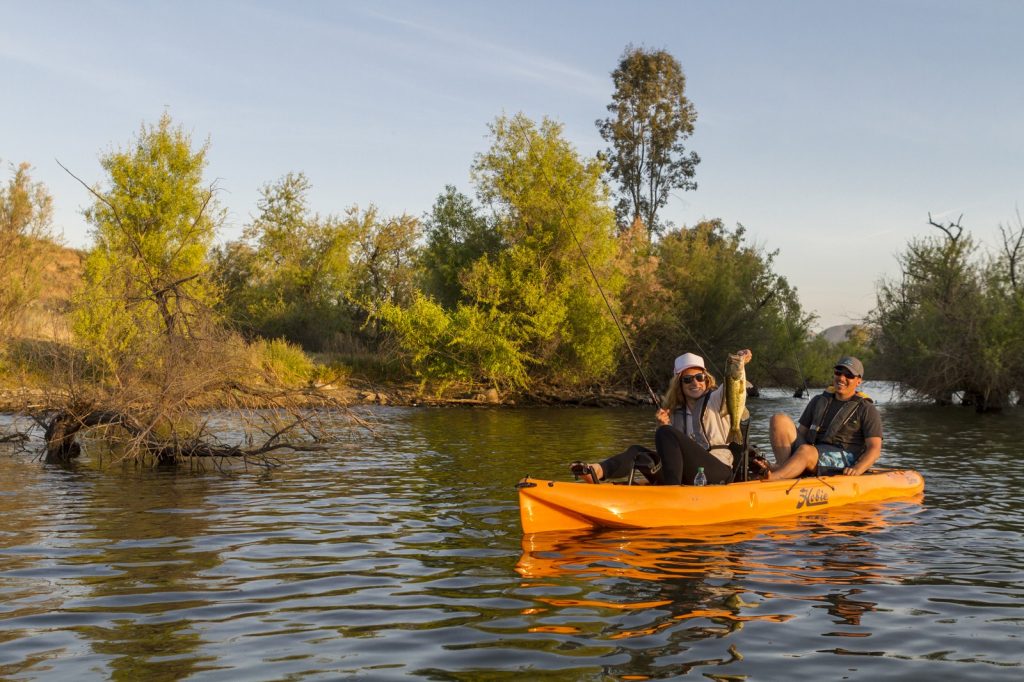 If you are looking for an excellent tandem kayak that is designed specifically for the needs of anglers, it is hard to go wrong with the Mirage Outfitter. It provides ample storage space for your tools and tackle, and it is equipped with two very comfortable seats.

While it is a beefy boat that is capable of carrying more than 400 pounds, it still scoots across the surface in relatively speedy fashion, thanks to the included pedal drive system. But one of the most important characteristics of the Mirage Outfitter is its remarkable stability, which allows anglers to ride in a variety of positions or to stand up while fishing.