Historically, inflatable kayaks were considered inappropriate for anglers; the likelihood of snagging the craft with a hook or nicking it with a pair of cutters was simply too high. But manufacturers have overcome these problems by using durable and hook-resistant materials, so modern anglers have a number of inflatable kayaks from which they can choose. Find all the information you need about this kayak in the Elkton Outdoors 10′ inflatable kayak review.

The Elkton Outdoors 10’ Inflatable Two-Person Kayak is a great example of this type of kayak, and it provides anglers with an affordable, easily transported craft for fishing in rivers and lakes. And like most hard-shelled kayaks designed for fishing, the Elkton Outdoors Inflatable Kayak comes equipped with several fishing rod holders and paddle holders to keep your hands free.

The Elkton Outdoors 10’ Inflatable Kayak is made from 18-Gauge rip- and hook-resistant 1000D PVC. This helps to prevent bladder punctures, but many anglers experienced busted seams and reported that the stitching was of poor quality.

However, it isn’t clear whether these types of problems stem from poor craftsmanship or from improper inflation procedures — the manufacturer does specifically instruct users to avoid using electric air pumps with this kayak. Instead, you must use the included foot pump. Like most other inflatable kayaks, the Elkton Outdoors Kayak is quite light and only weighs about 42 pounds. 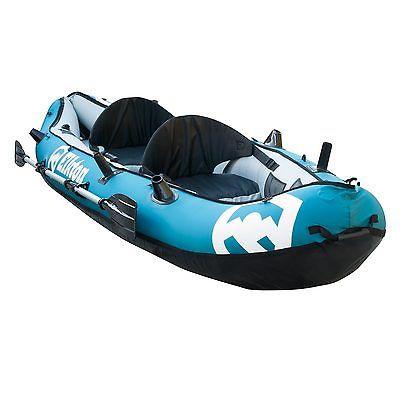 Like most other inflatable kayaks, the Elkton Outdoors Kayak doesn’t come equipped with inset compartments for storing your gear. Instead, it provides six small mesh pockets in which you can place tackle boxes, tools and similar equipment. It does feature several metal D-rings for attaching ropes, spray shields or other equipment.

The Elkton Outdoors Kayak provides six rod holders, two of which are vertically positioned, while the other four are positioned to facilitate trolling. This inflatable craft also comes with a carrying case, which will help protect the kayak during storage.

The Elkton Outdoors Inflatable Kayak is moderately comfortable. It comes equipped with two inflatable seats, each of which can be adjusted to suit your body. Most anglers will likely find the seats comfortable and easy to inflate, although they don’t provide as much back support as some rigid seats do.

Of course, like all other inflatable kayaks, the Elkton Outdoors Kayak’s air-filled bladders provide plenty of comfortable places to rest your arms or legs. Additionally, this kayak features a roomy cockpit, which offers plenty of legroom.

This 9-foot-10-inch-long, 35-inch-wide kayak is quite stable and is unlikely to tip over during proper use. It allows for easy entry and egress, even from the water, and it is stable enough to stay upright when you are battling big fish. However, it is definitely not designed for rough waters, so you’ll have to stick to farm ponds and calm lakes when using it.

Despite the craft’s stability, it does not provide enough support to permit standing, but this is a common problem with inflatable kayaks. However, the kayak is quite buoyant and has a 450-pound capacity. 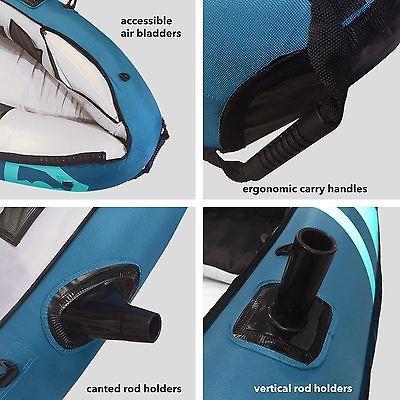 Few inflatable kayaks will perform as well as their hard-shelled counterparts, but the Elkton Outdoors Kayak provides enough stability for calm, low-current waters. It also features a skeg to provide better tracking and improved performance.

The greatest hindrance to the craft’s mobility is likely the placement of the fishing rod holders, which tend to get in the way when you are paddling. The kayak is easy to load, haul to the water and launch, thanks to its low weight and the four included handles (one at the stern, one at the bow and one on each side).

The Elkton Outdoors 10’ Inflatable Two-Person Kayak is a good choice for price-conscious anglers who want a lightweight, easy-to-transport kayak for fishing relatively calm waters. It probably won’t satisfy advanced kayakers, who will generally demand a craft that provides greater stability and maneuverability. It has adequate storage space and does come with six different rod holders, but it doesn’t have any watertight storage compartments nor any articulating rod holders.

It is, however, a high-capacity kayak that provides plenty of space for a pair of anglers. If you decide the Elkton Outdoors Kayak is the best option for your needs, be sure to follow the manufacturer’s instructions regarding inflation and bring along a good dry bag to store your cell phone and other valuables.