Just because you want a tandem kayak doesn’t mean you can’t find a reasonably priced model that was specifically designed to provide the kind of performance and features an angler needs. For example, Brooklyn Kayak Company’s UH-TK181 is a sit-on-top, two-person kayak that is nimble, stable and loaded with storage space. The BKC UH-TK181 review goes in depth covering all features.

A relatively big craft, the UH-TK181 is a 12.5-foot-long, 34-inch-wide kayak that weighs about 68 pounds and boasts a 450-pound capacity, so you’ll feel confident riding around with your fishing buddy all afternoon.

Like most Brooklyn Kayak Company crafts, the UH-TK181 is built from lightweight, yet strong polyethylene. Most kayakers who tried the craft found that the plastic was tough, resilient and resistant to scratches.

It features a smooth, angular hull to help it cut through all types of water, and it also features a central keel and four deep channels to help keep it stable, provide plenty of maneuverability and ensure it tracks well while you head from one fishing spot to the next. It is a little heavier than many other kayaks, but this is to be expected from a relatively long, tandem-style kayak that is built to support two full grown adults. 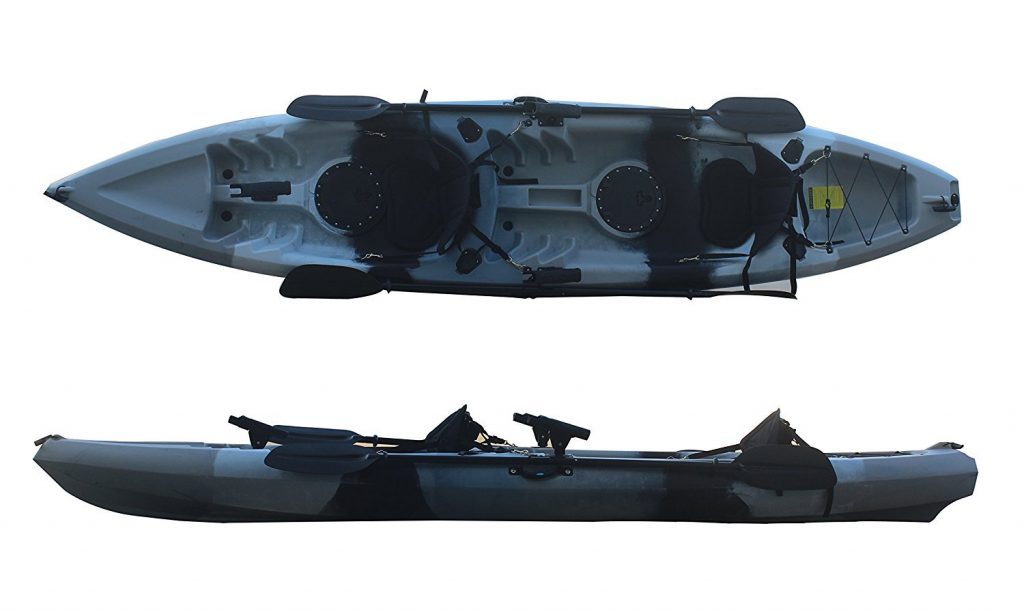 The UH-TK181 features a few different places to store your gear. An elastic-cord-equipped cargo area is located at the stern and a small space at the front that may work for holding small items that don’t need to be secured. Two watertight compartments are included for holding tackle, tools or personal items.

Both watertight compartments are accessed via a twist-lock-style hatch, and they are located directly in front of each seat. It features seven different rod holders – one articulating holder at the stern, one articulating holder on each side of the rear seat and four flush-mount holders on the sides. Two paddle rests are also included to free your hands for fishing.

The UH-TK181 provides a pretty comfortable ride, thanks in part to the deluxe seats included with the kayak. Most anglers found the seats to be comfortable, and they are easy to adjust to provide the most comfort for your body type. However, a few anglers desired a little more back support and found it necessary to swap out the included seats for aftermarket models.

The UH-TK181 is a roomy kayak, and, unlike some other tandem models that make riders feel a bit cramped, the UH-TK181 provides plenty of room for both passengers. In fact, a few anglers reported that it is large enough that you can lay down in the kayak when you need a break. 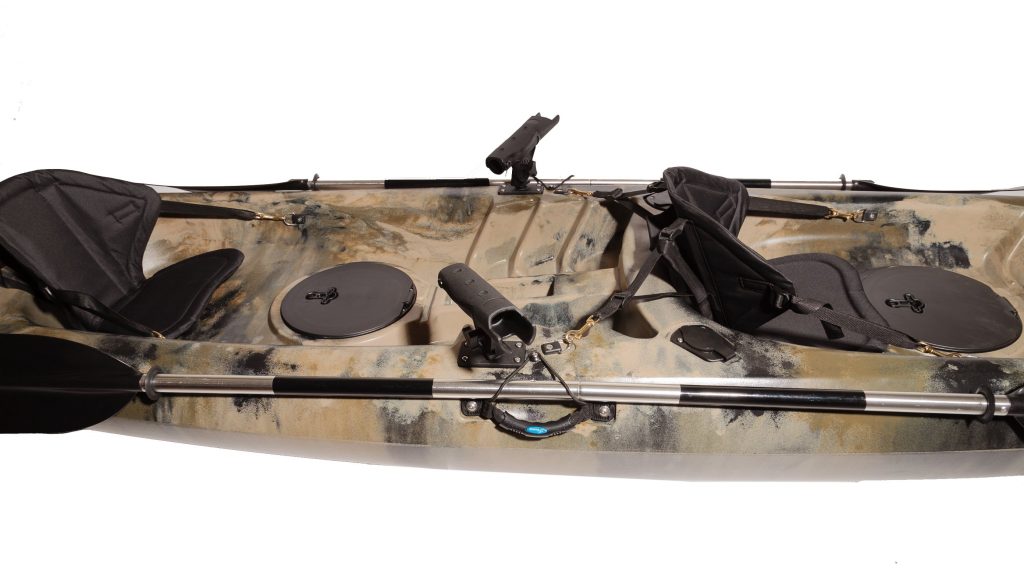 The UH-TK181 is a very stable craft, and most anglers found that it handled moderate waves well and cut through choppy water without any problems. In fact, stability was one of the most consistently praised aspects of the craft by those who’d tried it.

Several anglers found it stable enough to accommodate children or dogs, and although it isn’t specifically designed for standing, a few anglers felt confident enough to stand up while fishing in it. It is also a very buoyant craft, and several anglers mentioned that it was capable of supporting more than 450 pounds – its listed capacity.

The UH-TK181 is a very maneuverable craft for a tandem-style kayak, and most anglers who tried it found that it performed very well. It tracks very well, thanks to the included keel, and it is easy to turn on a dime. In fact, several anglers reported that it was easy to maneuver even when piloted by a single rider sitting in the back seat.

Several anglers also reported that it was easy to pilot the wave through small waves and relatively rough waters. A few customers did report that the fishing rod holders slightly obstructed their paddling motion, but this wasn’t an especially common complaint.

The UH-TK181 is one of the leading tandem-style fishing kayaks at the intermediate price point. It is a robust kayak that is built to perform well in moderately rough waters, and it is designed to hold an impressive amount of weight. It provides plenty of storage space for most anglers – especially for those who use this kayak in solo fashion – and plenty of rod holders for extended trips.

It doesn’t include a standing platform, nor does the manufacturer specifically recommend standing in the craft, but a few anglers reported that it is probably stable enough that you could stand up if you wanted to do so. But the most impressive characteristics of this kayak are clearly its stability, handling and maneuverability, which surpass that of most similarly priced kayaks.