What determines the best ocean fishing kayak? Part of the appeal of kayaks is their versatility. Many modern fishing kayaks work as well for anglers paddling around small farm ponds as they do for those cruising over reefs and offshore shipwrecks. If you like to fish in different types of waters, you can certainly find a vessel suitable for doing so.

The ocean presents more challenges and hazards than the relatively calm and shallow waters of freshwater locations do, and you’ll need a kayak that is designed to keep you safe and comfortable while you tackle big waves and gigantic fish. And while there are a number of kayaks that are quite capable on the open ocean and will certainly help you find, catch and land more fish, one – the Ocean Kayak Trident 15 Angler — clearly stands out from its competitors.

Below, we’ll talk about the Trident 15 Angler and explain why it is such an excellent option for ocean-going anglers. But first, we’ll discuss the unique challenges saltwater kayakers face, and the features and characteristics of kayaks that make them the best ocean fishing kayak. 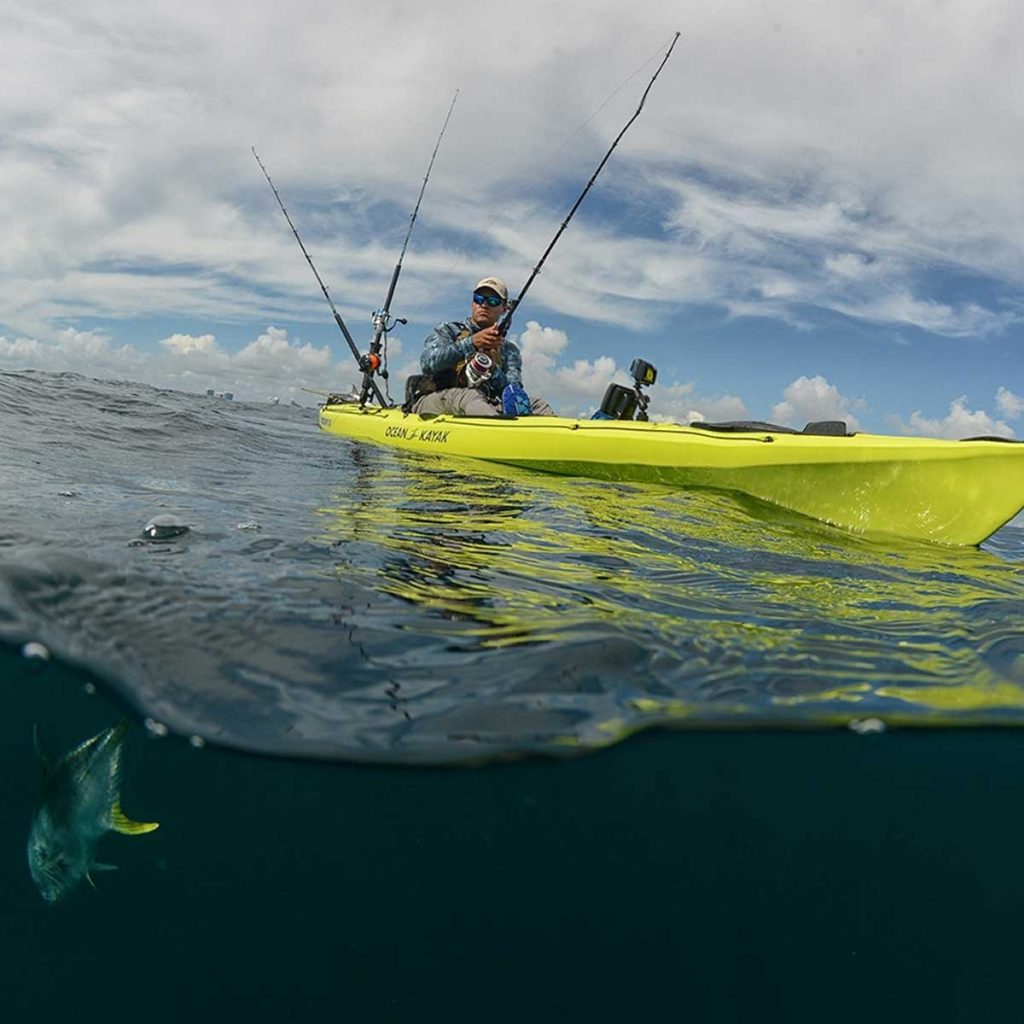 What Are the Differences Between Freshwater and Saltwater Kayaking?

If you are just planning on paddling around 10 or 20 yards from shore, you can probably use just about any high-quality kayak – even one designed for freshwater use. But, if you intend on crashing through the surf and heading for deep water, you’ll want to select a kayak that will keep you safe, dry and comfortable in more challenging conditions.

Some of the most important features to seek when looking for a seaworthy kayak include:

Most Kayaks Designed for Ocean Use Are Long and Fast

You’ll typically need to cover much longer stretches of water while fishing in the ocean, and if you want to have plenty of time left to fish once you reach distant destinations, you’ll need to get there in a hurry. Fast kayaks help you do exactly that, and they also offer an increased measure of safety, as they’ll allow you to return to shore quickly if need be.

And because longer kayaks are generally faster than shorter kayaks, you’ll typically find that the best ocean-going kayaks are at least 13 feet long, and most of the best are 15 feet in length or longer.

Kayaks Designed for Saltwater Use Must Be Rigid

You’ll have to break through surf and swells to reach most fishing locations, and you’ll need a kayak that can withstand rough waters to do so. This means kayaks designed for saltwater anglers must be especially rigid, so they won’t flex when you encounter waves.

Ocean-Going Kayaks Must Provide Stability without Increasing the Width Unnecessarily

No angler wants to tip over and wind up in the water, but there’s a big difference in falling in an 8-foot-deep pond and 100 feet of water far from shore. Accordingly, stability is a very important characteristic to seek in saltwater kayaks. However, because speed is also important, you’ll want to avoid kayaks that are excessively wide. The stability must instead be provided through hull design. 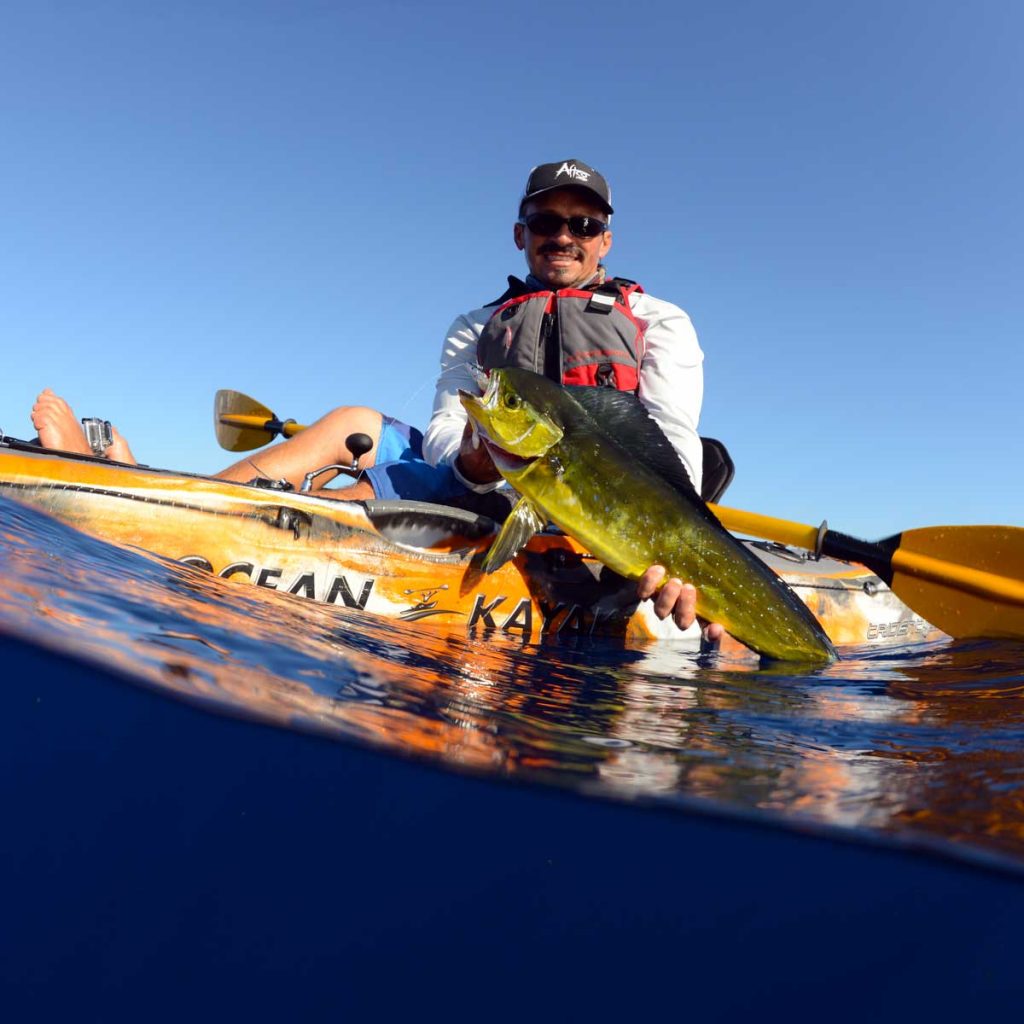 Because saltwater fishing trips usually last longer than short little trips around a pond or lake, you’ll usually want to bring more tackle and gear when heading out to catch a few fish. You may also need more space to accommodate grouper, mahi-mahi and other large gamefish of the open ocean.

Because saltwater is more corrosive than freshwater is, saltwater kayaks must be equipped with rust- and corrosion-resistant components. This includes everything from D-rings and connecting hardware to skid plates and paddle keepers.

Because you’ll need to bring more gear along on most saltwater fishing trips, and the fish you’ll catch are often much heavier than common freshwater species, it is important to select a kayak that can support a lot of weight. Whereas many smaller freshwater kayaks are only rated for about 300 pounds or so, it is generally preferable to select kayaks rated for 400 pounds or more when picking a saltwater kayak.

It probably shouldn’t be surprising that the very best kayak for saltwater anglers is made by a company called Ocean Kayak. And although some freshwater anglers – particularly those who fish large bodies of water – may like using the Trident 15 Angler, the best ocean fishing kayak.

From the moment you climb into the Trident 15 Angler, you’ll notice that this is an extremely well-made kayak, that is built from high-quality materials and with plenty of attention to detail. Constructed from a single layer of polyethylene, this 15.5-foot-long kayak is rugged, yet sleek, and it provides all of the rigidity you need to take on big swells. It is built to take the abuse serious anglers often dish out, and it even comes with a skid plate to protect the hull when traveling through rocky shallows and over reefs.

But the Trident 15 Angler isn’t just durable, it also performs as well as many other kayaks that cost twice as much. It is incredibly fast thanks to its long and narrow design, and the sharp bow and stern help reduce water and wind resistance while you’re paddling. This narrow design also makes it easier to cut through the surf while trying to reach deep water.

The Trident 15 Angler tracks like it is on a rail, although its length does make it a bit difficult to turn in tight spaces – fortunately, you’ll rarely find this necessary while fishing in the open ocean. If you want to improve the maneuverability of the vessel, you can purchase it with an optional foot-controlled rudder. This will make it easy to put the kayak right where you want it and make subtle course adjustments while crossing long distances.

Stability is important for kayakers traveling through the open ocean – you don’t want to get dumped overboard while fishing miles from the shore in water that may be more than 1,000 feet deep. Fortunately, the Trident 15 Angler is a relatively stable, sit-on-top kayak, and you’ll typically find that it helps you remain upright while paddling, casting and fighting fish. Ocean Kayak even characterizes the Trident 15 Angler as the most stable vessel in the Trident product line.

Some anglers will likely find the Trident 15 Angler stable enough to permit standing, although others may not feel confident doing so. There are numerous photographs and videos of anglers standing up on the Trident 15 Angler but given its relatively narrow beam (which measures only 28.5 inches), you’ll want to be careful. One thing’s for sure: Whether you want to try standing or remain seated while fishing, the Trident 15 Angler will keep you and all of your gear floating high on the water, thanks to its 455-pound weight capacity. A generous weight capacity is especially important for anglers who are trying to catch big fish, which may weigh 50 pounds or more.

You’ll always want a lot of storage space when fishing in the ocean, and the Trident 15 Angler provides all you’ll need and more. Two 20-inch-long, 11-inch-wide bow hatches are included on the craft; one is located at the bow, the other at the stern. Each includes an easy-to-operate latch to keep your gear secure, while still making it easy to access the tools and tackle stored inside.

The Trident 15 Angler also includes gunnel accessory rails, so that you can mount your favorite fish finder, GPS or aftermarket rod holders. It also features a plate for mounting additional accessories, and it includes a scupper hole designed to accommodate transducer cables. A paddle holder, rod rest and two flush-mount rod holders are also included.

And, because saltwater anglers often chase bigger fish than their freshwater-fishing counterparts, you’ll need a large cargo deck to hold a big live or cooler. Once again, the Trident 15 Angler has you covered, as it provides an oversized cargo deck, which is equipped with bungee cords to keep everything in place.

But the most noteworthy bit of storage space provided by the Trident 15 Angler is the included Mod Pod II. This multi-function storage compartment not only provides a place to store frequently needed tools and tackle, it also features a very helpful lid, which provides several places to mount rod holders, includes a magnetic tray for lures and terminal tackle, and bungee straps for additional storage. It even features a built-in cup holder and a ruler so that you can measure your catch.

You’ll also remain quite comfortable while fishing on the Trident 15 Angler. The cockpit is a bit narrow, but it is quite long and provides enough leg room — 51 inches – to accommodate most anglers. The ACS2 Seat is padded and fully adjustable, and the support track foot brace system allows you to adjust the braces to achieve a comfortable paddling position.

And although the fish don’t care what your kayak looks like, the Trident 15 Angler is a very sharp-looking vessel. It is available in four different color patterns, including Urban Camo, Brown Camo, Orange Camo and Lemongrass, thereby ensuring that all anglers can pick one that suits their taste and style. For safety’s sake, the Trident 15 Angler features reflective deck rigging. This will help make sure other boaters can see you while you’re on the water, to help avoid collisions and accidents.

At 91 pounds, the Trident 15 Angler isn’t especially light, so you’ll likely need a cart or a friend to help you get it down to the water. However, it does feature four carrying handles, located at the bow, stern and on each side of the cockpit. Nevertheless, the Trident 15 Angler is still much lighter than many other kayaks designed for ocean use, especially those models that feature built-in propulsion systems.

Important Pros and Cons of the Trident 15 Angler

Despite being the best ocean fishing kayak, the Trident 15 Angler – like all other kayaks — has a variety of strengths and weaknesses. Some of the most noteworthy include:

Fishing from a kayak in the open ocean is a serious endeavor, which necessitates a serious vessel. The Ocean Kayak Trident 15 Angler certainly deserves this title of best ocean fishing kayak, as it provides almost all of the features and characteristics you’d want while searching for a seaworthy kayak. It is fast, rigid and durable, and it provides all of the comfort and storage space modern anglers demand. While it may not be stable enough to allow all anglers to stand confidently, it’ll certainly keep you dry and safe while battling big fish or crashing through the surf.