Inflatable kayaks and rafts have been around for decades, but unfortunately, few were suitable for serious fishing. They were flimsy, impossible to control on the water and rarely buoyant enough to support a full-grown angler. And you could forget about bringing any gear along, as there were no storage compartments to hold it. Even if you could find an inflatable craft that would keep you afloat and allow you to paddle around a bit, they were usually made of incredibly thin materials, which made them very easy to puncture.

But recently, several manufacturers began trying to produce high-quality inflatable kayaks, that would perform well on the water and provide the types of features anglers need. A few have succeeded in this regard and started marketing inflatable kayaks that are quite functional, exceedingly portable and remarkably affordable. Many anglers who formerly preferred hard-shelled kayaks even began considering switching to an inflatable vessel, thanks to these advances. 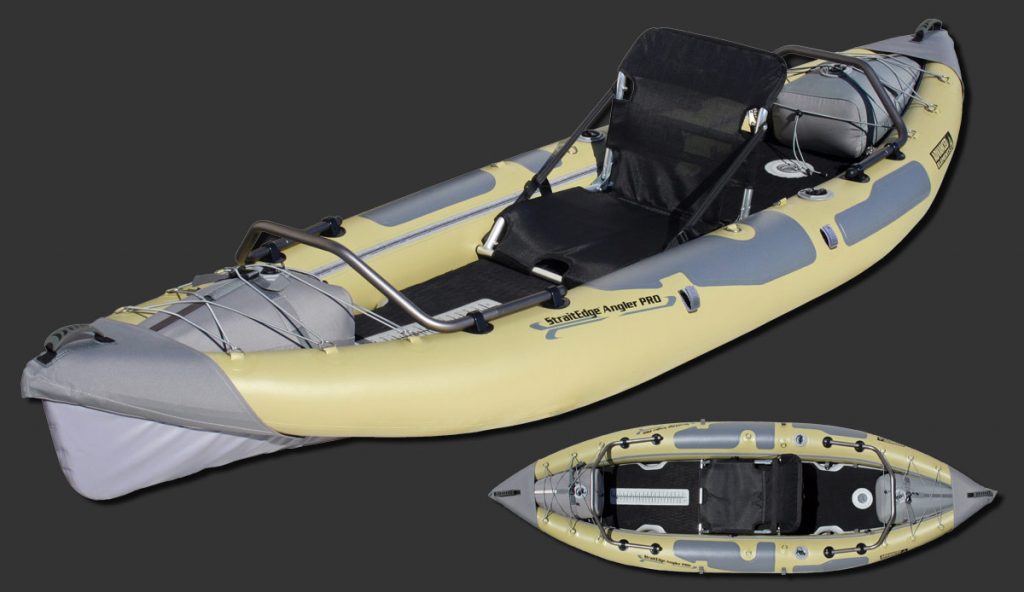 But, not all inflatable kayaks are high-quality crafts. In fact, many still fall into the “toy” category and remain completely unsuitable for serious fishing. So, you must be careful when trying to pick one to ferry you around your local pond or river.

But, we’ll try to make this easy for you: If you are looking for the best inflatable fishing kayak on the market, you are sure to find the Advanced Elements Straitedge Angler Pro AE1055 fits the bill perfectly. No other inflatable kayak on the market provides a comparable combination of quality and features, while still being priced very reasonably for the quality it provides.

The Benefits and Drawbacks of Inflatable Fishing Kayaks

There is no perfect kayak – every model and style presents a combination of benefits and drawbacks. Some of the most notable pros and cons associated with inflatable kayaks are detailed below.

The Benefits of Inflatable Kayaks

The Drawbacks of Inflatable Kayaks

Is an Inflatable Kayak Right for You?

Inflatable kayaks are ideal for many anglers, but they aren’t right for everyone. To help determine if you should consider an inflatable kayak, ask yourself the following questions:

If you answered the questions above affirmatively, an inflatable kayak may be the perfect choice for you. As mentioned above, inflatable kayaks are very portable and stable, and they’re easy to store in very small spaces. You’ll have to be willing to reduce the amount of gear you bring or spend some time organizing it differently, and you’ll also have to be willing to inflate and deflate the vessel every time you use it, but these are pretty minor drawbacks. 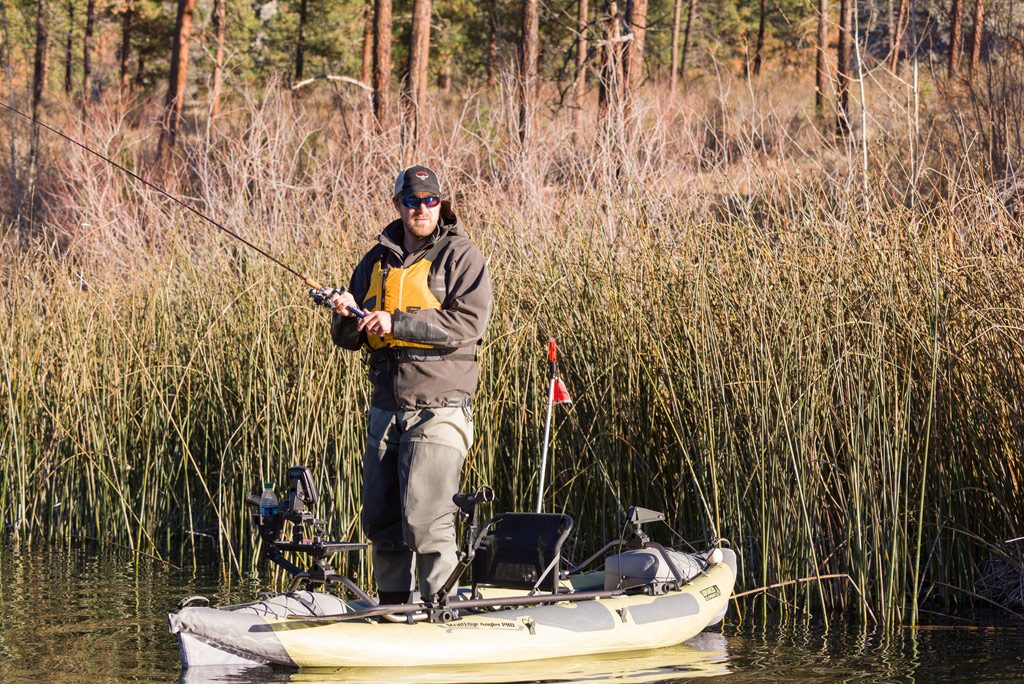 Features and Characteristics to Seek in an Inflatable Fishing Kayak

As when you are selecting any fishing kayak, you’ll want to seek out an inflatable model that provides all of the features and characteristics that a good vessel should have. There are also a few things to look for that are only important for those selecting an inflatable craft.

It Must Be Made from Durable Materials

Because a punctured air bladder could result in a sinking ship, durability is an especially important concern for those seeking an inflatable kayak. Most of the best models – including the Straitedge Angler Pro AE1055 discussed here – include abrasion-resistant patches to improve the durability of the craft.

It Must Handle Well on the Water

While no inflatable craft will perform as well as an intermediate-level hard-shelled kayak will, the best inflatable kayaks will track and handle reasonably well. The best models typically feature keels, rudders or fins to help improve the tracking ability of the vessel.

It Must Provide Places to Store Your Gear and Tackle

It Must Provide a Comfortable Ride

Uncomfortable kayaks rarely get used, as they’re no fun to pilot around the water. When looking for a comfortable inflatable kayak, the most important thing to seek is a boat that provides a rigid, adjustable seat, rather than an inflatable seat. Inflatable seats often provide plenty of cushion, but they usually don’t provide the kind of support most anglers desire.

It Must Be Easy to Transport

Part of the reason inflatable kayaks are desirable is their portability. So, it is very important to select a vessel that is lightweight and includes carrying handles. It should also feature multiple valves so that you can deflate it quickly once you’re done fishing and ready to call it a day.

None of these features or characteristics should be considered imperative; if you find a kayak you like that satisfies four of the five criteria, it may work just fine. However, you certainly want to select a kayak that satisfies as many of these criteria as is possible.

You can tell that the Advanced Elements Straitedge Angler Pro AE1055 is special just by looking at it. It blows most of the other inflatable kayaks around out of the water, and it is clearly designed with anglers in mind.

The Straitedge Angler Pro AE1055 is a remarkably well-built vessel. It features a five-chambered hull with built-in aluminum ribs in the bow and stern and a drop-stitch floor to provide a level of rigidity that is rare among inflatable kayaks. It also features abrasion pads to protect the high-use areas around the cockpit and on the sides of the craft.

At 10-feet and 6-inches in length, the Straitedge Angler Pro AE1055 is pretty big for an inflatable kayak. This not only helps provide a roomy ride for even big and tall riders, but it also allows the boat to support up to 400 pounds of rider and cargo. This means you’re unlikely to find yourself leaving any gear behind or worrying about overtaxing the craft with your body weight.

And because it is so well-built, the Straitedge Angler Pro AE1055 also provides a comfortable and enjoyable ride. It is quite capable on the water, and tracks better than most other inflatable vessels do, thanks in part to the included (and removable) deep fin and the built-in hull chine. It’s also very stable, thanks to the combination of its inflatable design and super-wide 38.5-inch beam – tipping this kayak over would be quite an accomplishment.

In fact, the Straitedge Angler Pro AE1055 is even stable enough for most anglers to stand up while fishing. This is an exceptionally rare characteristic among inflatable crafts and is only possible thanks to the rigid floor.

It isn’t a particularly fast craft, but few inflatable kayaks are – it’s one of the primary tradeoffs you must make when opting for these types of vessels. However, it can be used in conjunction with an ElectraFin® Motor, which will help improve your ability to scoot around the water.

The Straitedge Angler Pro AE1055 is quite comfortable for riders and comes with a premium AirFrame PRO seat. These seats provide plenty of back support (even for the upper portions of your back), and they can be adjusted in several different ways to keep you comfortable while paddling or fishing. Mesh fabric is included in the seat design to help let your back breathe during long trips.

Like most other inflatable kayaks, the Straitedge Angler Pro AE1055 is very easy to transport, and you’ll find it easy to carry it from your truck to the water and back. It comes with handles at the bow and stern, which make it easy to carry with a friend while it’s inflated, and most anglers will be able to carry it by themselves while deflated, as it weighs only 45 pounds.

The Straitedge Angler Pro AE1055 doesn’t come with any storage compartments or pockets, but it does feature two cargo-decks, located at the bow and stern. Each one provides the perfect place to store backpacks, coolers and similar items, and features bungee straps to keep your gear secure in even rough waters. Additionally, several stainless-steel D-rings are situated around the cockpit and give you places to clip or tie gear.

But, the Straitedge Angler Pro AE1055 also provides two 1-inch metal rails located in the front and back of the cockpit. These provide you plenty of places to mount fish finders, GPS units, rod holders or any other rail-mountable items you’d like. Two paddle keepers are also included to keep your hands free while you’re fishing.

Pros and Cons of the Straitedge Angler Pro AE1055

All kayaks have their good points and their not-so-good points, so it is important to weigh the relative strengths and weaknesses of any kayak before making your selection. Some of the most notable pros and cons of the Straitedge Angler Pro AE1055 include:

Inflatable kayaks aren’t a good choice for all anglers, but for those who like the combination of portability, affordability and stability inflatable vessels provide, the Advanced Elements Straitedge Angler Pro AE1055 is easily one of the best options available. It compares favorably with many hard-shelled models, and it provides almost all of the features and characteristics