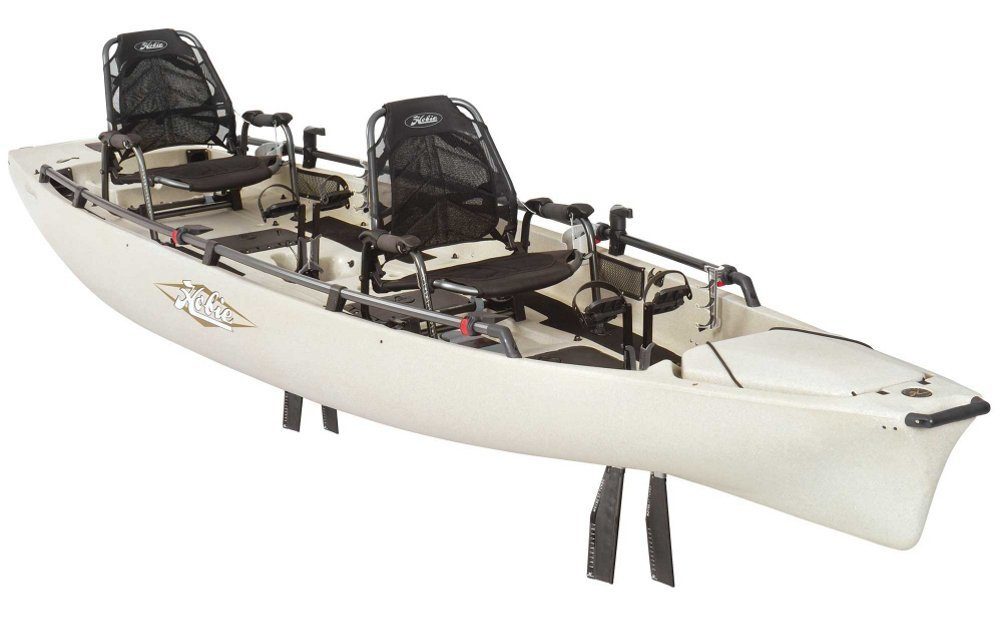 Although some anglers prefer to fish alone, most – including anglers who like to fish from kayaks – prefer to go with a friend. This is easy for those fishing from conventional boats, piers or the shoreline, but it can be tough for kayaking anglers to find a partner. Not that many anglers have their own kayak, so you’ll often be forced to chase fish on your own.

And even if you find a friend with a kayak who’s willing to tag along on your next fishing trip, you’ll often find that you drift apart while hunting for bites. It can also be difficult to communicate between different kayaks (especially when fishing in the surf); in practice, you’ll often feel like you’re fishing alone.

But a tandem kayak solves all of these problems. Built to carry two riders (some models will even accommodate three anglers), tandem-style kayaks allow you to fish with a friend, even if he or she doesn’t have a kayak of their own. And because you’ll be sitting only a few inches away from each other, it’s easy to discuss strategies and engage in casual conversation to pass the time.

But like all other kayaks, tandem kayaks vary wildly in terms of quality, performance and price. To select the best tandem-style kayak, you’ll want to carefully consider the characteristics of the various models available and the features they possess. But, unlike some other categories in which there are several solid contenders for the title of “best,” there is a single, clear leader in the tandem-style fishing kayak category: The Hobie Mirage Pro Angler 17T.

We’ll explain why the Mirage Pro Angler 17T is such a clear leader in the category below, and detail all of the features and characteristics that make it such a stellar craft. But first, we’ll discuss some of the benefits and drawbacks tandem kayaks provide and what you’ll need to look for when picking out your own.

The Benefits and Drawbacks of Tandem-Style Fishing Kayaks

The primary benefit tandem-style kayaks provide is pretty obvious: They’re designed to accommodate two riders. This not only means you can fish with a buddy and enjoy some company during the boring times when the fish aren’t biting (and it guarantees you a witness for those giants that get away!), but it also provides a few other benefits – many of which are rarely considered – for anglers who use them.

Some of the most notable benefits of tandem kayaks include:

It is always safer to fish with a friend than by yourself, and this is especially true of those fishing from kayaks. For example, you may become injured while battling a fish or working with tackle. If you’re by yourself, you’ll have a hard time tending to the wound and getting back home. But if you’re fishing with a friend from a tandem-style vessel, your buddy can take care of the paddling or pedaling, if you’re unable to do so.

Whether you are interested in a pedal- or paddle-powered tandem kayak, you’ll enjoy an easier ride as your partner can contribute some extra muscle to the task. Tandem kayaks are generally heavier (and often longer) than solo models, and two anglers usually weigh more than one angler does, but these liabilities are easily offset by a second set of arms or legs.

Just because a kayak has two seats doesn’t mean you must always use both. Most tandem kayaks are still suitable for solo use, and this will give anglers an incredible amount of space to store rods, tackle and other gear. A few tandem kayaks feature adjustable seats, which can be slide forward or back for better solo performance, but others can simply be pedaled or paddled from either one.

Because long kayaks are typically faster than shorter kayak are, and most tandem-style kayaks are rather long, most tandem kayaks scoot around in relatively zippy fashion. And if both riders are both helping propel the vessel (or you attach an aftermarket motor to the craft), you can really reach high speeds.

Because they’re designed to carry two anglers at a time, most tandem kayaks will support more weight than solo kayaks. This will not only help keep you and a partner floating high on the water, it’ll allow you to bring more tackle and gear when you use the kayak by yourself.

Despite the benefits presented above, tandem kayaks present a few drawbacks too. Some of the most important drawbacks to keep in mind include:

– Tandem Kayaks Can Be Difficult to Store and Transport

Because they’re longer and heavier than solo kayaks are, it can be difficult for individuals to carry tandem kayaks to and from the water. They may also necessitate the use of a larger vehicle, and some anglers may lack sufficient garage space to store them properly.

– Tandem Kayaks Are Often More Expensive than Solo Kayaks Are

Tandem kayaks are not only larger than most comparable solo models, they also include twice the components that solo kayaks do. So, instead of purchasing a kayak with a single seat and set of storage hatches (as well as any other features included with the craft), you’ll be purchasing two sets of each.